News and Highlights in February 2020

As preparation for the Fifth National Climate Assessment is underway, there is concern among scientists that the Trump Administration may interfere with the report’s conclusions, reports Scientific American. RCI affiliate Bob Kopp, who also expressed concern about political tampering, insisted the report should focus on what the public needs to know about climate change, such as new information about the instability of the Antarctic ice sheet and thawing permafrost releasing carbon dioxide.

Sudden cooling due to smoke produced by nuclear war between India and Pakistan or the United States and Russia would trigger sudden changes in ocean chemistry, according to a new study in Geophysical Research Letters. The absorption of excess carbon dioxide in the atmosphere by the ocean would reduce the aragonite saturation state, making it difficult for marine organisms to maintain their shells. RCI affiliate Alan Robock and RCI intern Joshua Coupe were co-authors of the study.

The President’s Task Force on Carbon Neutrality and Climate Resilience held a public town hall on February 12th for public input on Rutgers University’s plan to achieve carbon neutrality, reports The Daily Targum. RCI affiliate Robert Kopp kicked off the town hall by giving a presentation based on a case study on emissions at Rutgers and afterwards students were able to voice their concerns and demand for rapid environmental action. 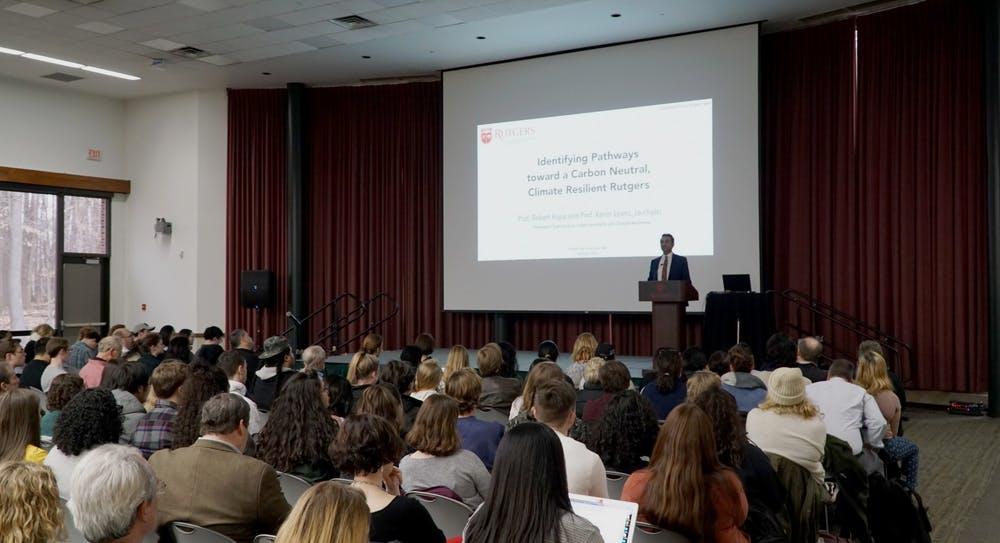 Photo by Filip Checko of the The Daily Targum

Amidst calls for the divestment of fossil fuels, the state of New Jersey has decided not to remove financial ties to the fossil fuel industry, reports Yahoo News. According to the New Jersey investment council which makes all investment decisions, divesting would eliminate their powerful voice as a shareholder. The council is currently seeking a climate-risk analyst and a sustainable portfolio manager to assist in climate change-related financial engagements.

The Representative Concentration Pathway (RCP) scenario known as RCP 8.5 may not be as likely as previously thought, according to a recent comment published in Nature and an article in Scientific American. The pathway was designed when China was expanding coal production at an astonishing rate and described a world of continuously growing emissions, but recent global commitments to reduce emissions make it less likely. According to RCI affiliate Bob Kopp, RCP 8.5 is useful to test out climate models, but it’s important to communicate its likelihood to policymakers and the public to show climate goals are feasible.

New Jersey will be the first state to require builders account for the impact of climate change to receive government approval for projects, reports the NY Times. Governor Phil Murphy recently announced the change as part of an effort by states to counteract inaction on climate change at the federal level. The NJ DEP will be seeking public feedback on potential changes to these rules in the coming months. 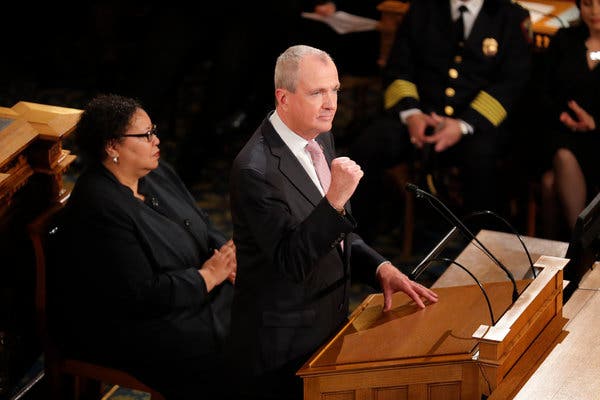 Concern over the re-emergence of ancient pathogens locked away in melting glaciers and permafrost has increased has grown following a study warning that warming could release never seen pathogens into the environment. These fears may be overblown according to RCI affiliate Paul Falkowski, who emphasizes the risk of direct contact is extremely low as these viruses are located in remote regions of the Arctic.

House Republicans are proposing to plant 3.3 billion trees annually as one component of a bill to combat the crisis of climate change, reports The Hill. The project would allow carbon to be sequestered, but according to RCI affiliate Paul Falkowski, it would remove at most 20% of the excess carbon dioxide in the atmosphere over a long period of time.

RCI co-director Tony Broccoli is co-author of the new book  “Beyond Global Warming: How Numerical Models Revealed the Secrets of Climate Change” with Syukoro Manabe chronicling the history of climate modeling, reports EOAS. The book, is written for scientists and students of science in any discipline related to climate science. 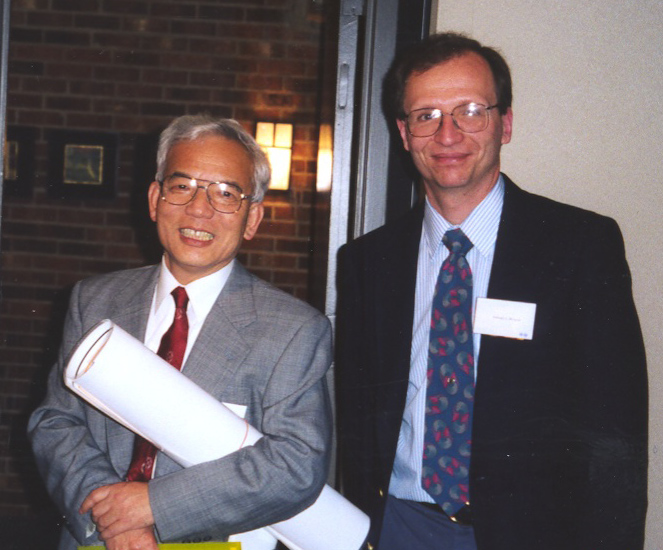 Suki Manabe and Tony Broccoli in 1998 at Suki’s retirement party from NOAA.

Three new companies have been added to the Rutgers EcoComplex Clean Technology Incubator, including Caelum Biosciences, Premissa Inc., and HiT Nano Inc. According to EcoComplex director Serpil Guran, the EcoComplex offers a good location, business development incentives, and technical expertise which has made it attractive to these types of companies.

Releasing sulfur aerosols into the stratosphere has been proposed as one way to slow anthropogenic global warming and a Harvard scientist is planning field experiments to determine which aerosol would be best to use to block solar radiation. This has provoked controversy from those who suggest this practice would increase the chances of geoengineering implementation by governments who see this as an inexpensive solution. According to RCI affiliate Alan Robock, implementation should not occur before the benefits and risks are fully quantified.

Rutgers researchers have created a tiny portable device that can be used to assess the health of microbes according to work published in Scientific Reports, reports Rutgers Today. The tool was initially developed to assess algae in relation to environmental stresses such as pollution or changes in environmental conditions relating to climate change. RCI affiliate Debashish Bhattacharya was a co-author. 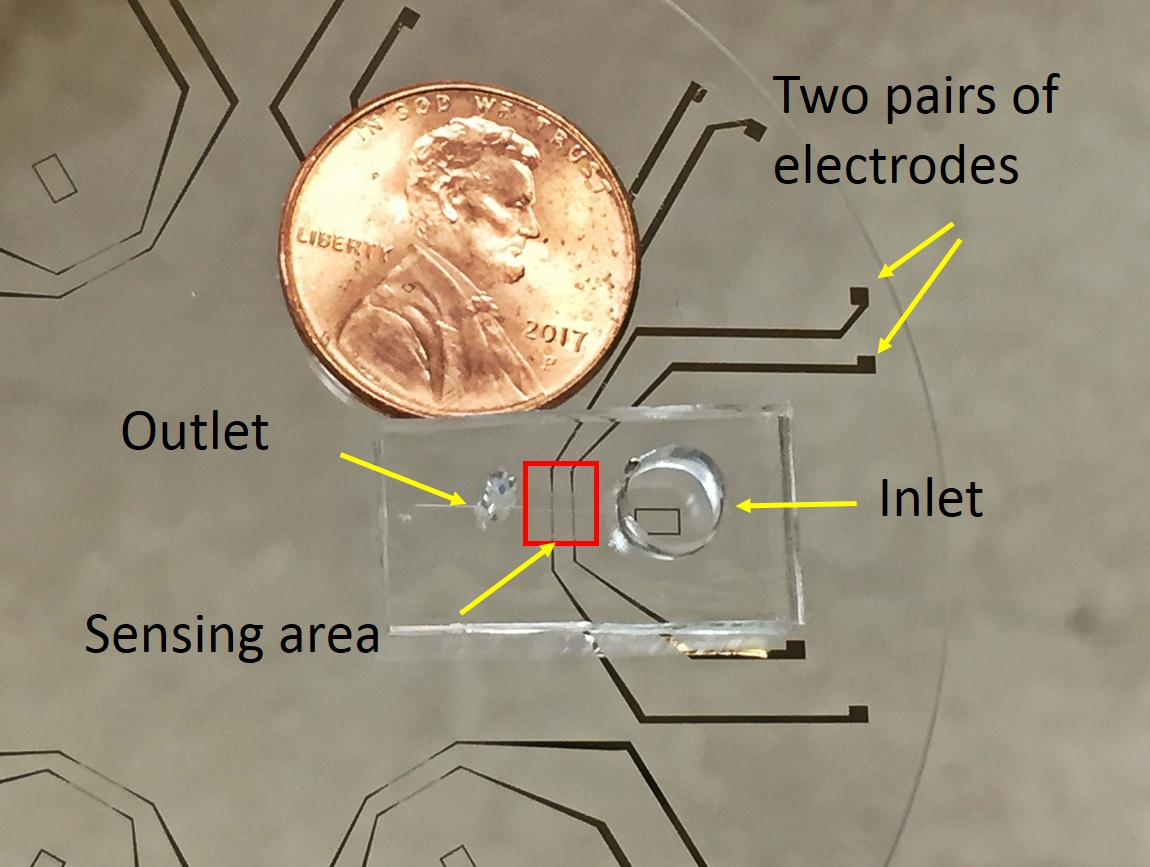 The tool as described in the study. Image: Jianye Sui