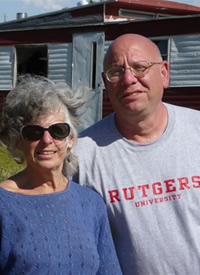 Frank J. Popper teaches land-use planning at Rutgers' Bloustein School of Planning and Public Policy and, with his wife Deborah Popper, a geographer retired from the City University of New York, at Princeton's Environmental Studies Program. Since 1987 the Poppers have explored the US and Canadian Great Plains' land-use future, which they describe in an environmental vision they call the Buffalo Commons. Their idea has provoked a continuing national debate over the region's prospects, and they believe it is likely to win out in the end, especially as climate change takes hold. The Poppers have done parallel studies of other declining regions, such as the Corn Belt directly east of the Great Plains, and declining large cities, such as Detroit and Cleveland. Frank Popper has also done separate studies of state land-use planning, federal public lands, and Locally Unwanted Land Uses (LULUs).